I’m trying my hand at stereo scopic rendering. I’ve got it working both on my Macbook and AlienWare Laptop with splitscreen rendering, just hooking it up to my 3D TV which can use a splitscreen approach. I did a writeup of the setup here: 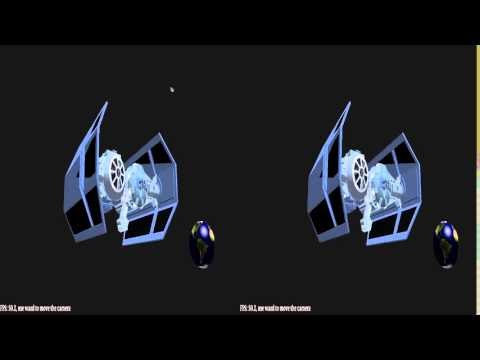 Ok, I decided to take a little fun sidestep. Those who've been following my blog for awhile know I've played around with this before. Back t...

My next step was looking into using a left and right backbuffer by enabling GLFW_STEREO. As far as I can tell the Geforce 555M in my AlienWare laptop supports this as long as I hook it up to a 3D screen through HDMI. It indeed is telling me it’s setup for 3D in the display settings so it should in theory work. Unfortunately the glfwCreateWindow fails.

Here is the code I’m attempting to get to work:

glfwCreateWindow returns NULL. It’s not giving me any feedback on why. I’ve tried both 1920x1080 and 1280x720 which are the only two resolutions 3D is supported on. My suspicion is that glfwGetPrimaryMonitor is returning my LCD screen instead of the TV even though I’ve told it to only use the TV.

Has anyone got any idea what step I’m missing here?

Note - I’m not sure the 555M supports OpenGL Stereo, I thought this was only available on professional GPUs.

I would debug this first by removing the hints and using glfwGetMonitorName and glfwGetVideoModes prior to window creation, outputing the results for information or just debugging via a breakpoint.

If glfwGetPrimaryMonitor is indeed returning the wrong monitor, you can use glfwGetMonitors to return all monitors and then select from these (by name or just manually for example). Once you have the output on the device you need you can then start re-adding the hints.

I’ve implemented a little configuration window that lets me select the monitor and modes returned by those functions. They work nicely but no luck.

For now I’m just assuming its just not in the realm of possibilities of my laptop and I’ll stick with splitscreen and letting the TV handle it. Seeing it’s a passive 3D TV it would half the horizontal resolution anyhow. Once I can do some testing on someones PC that we know has proper stereo buffer support we’ll see if I can get it to work.